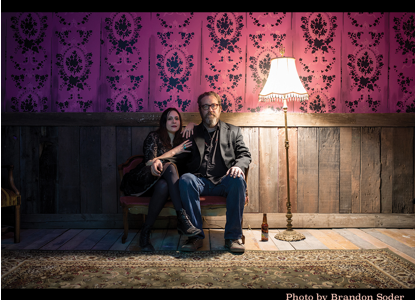 Husband-and-wife duo the Handsome Family has been labeled both alt-country and traditionalist, but truthfully their often-dark music lies in a unique space somewhere in between, blending the sounds of traditional country and bluegrass (and, especially, murder ballads) into a more modern scenery. They return with their new album ‘Unseen’.

Vocalist and composer Brett Sparks hails from Texas, where he studied music and briefly worked around the oil rigs. By the mid-’90s, he resided in Chicago with his wife Rennie Sparks, a fiction writer originally from Long Island. Brett persuaded Rennie to write lyrics for him, leading to the unusual and striking form of the Handsome Family’s songs — evocative scenes and brief tales (of both the daydream and ghost story varieties) in lieu of the standard verse-chorus-verse structure. Their new album ‘Unseen’ (out September 16) is 10 songs with the guiding theme of colour; telling stories mostly inspired by real events, exploring the light which emanates from things we can’t see.

Since 2001 Brett has made their albums in a converted garage at the back of their house. He recorded Unseen on a Mac and played most of the parts at night, with only hawk moths listening. There were guest musicians— David Gutierrez: mandolin on “Tiny Tina” and dobro on “The Silver Light.” Alex MacMahon: guitar on “The Silver Light,” baritone guitar and pedal steel on “Gold.” Jason Toth: drums throughout (except “Green Willow Valley”).

The Sparks’ music is steeped in the western gothic of New Mexico life. The unseen is powerful here. Nothing rusts, but entire oceans have disappeared. Ski masks mean robberies, but in the slow dive of the sun, enormous bugs awaken in thorny yards and unseen sirens and coyotes cry out to the purple sky. Just about anywhere you stand there’s been some blood drawn.

“Weightless Again”—100 best songs ever written about heartbreak” — THE GUARDIAN

Support comes from:
William The Conquerer
William The Conquerer is the moniker for folk treasurer Ruarri Joseph. Bursting with retro-infused energy, there are a myriad influences, underpinned by a taste for good, old-fashioned roots. One minute it’s a hushed JJ Cale that somehow finds its way to an angry Jim Morrison or a late-70s Dylan; the next it’s a grunge era Pearl Jam via Leonard Cohen and Tom Waits.

Over 14s welcome, under 16s to be accompanied by an adult